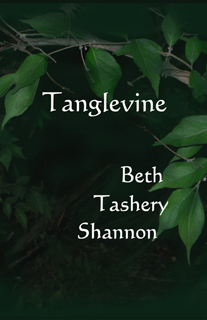 Demoted war hero Jihan arrives in the Bluegrass to extend the Domed City’s power and salvage his family’s reputation. When a fellow official disappears, he commandeers a horseback caravan as backup and rides to the remote village of Tanglevine to investigate. Windland, the caravan leader, guides him through bewildering woods to a blighted village where only the locals’ respect for Windland shields them from resentment. The savage killing of a young woman and her child provokes Jihan to vow justice, but deceived by the villagers, targeted by a hostile witch and seduced, then betrayed, by an elusive dancer, he begins to suspect that Windland has an agenda of his own. Gradually Jihan realizes that instead of a hunter pursuing a murderer, he is the prey of a hunter far more ancient than he. If he cannot believe in the impossible, the woman he loves will be destroyed.

Beth Tashery Shannon is as impossible to categorize as her writing is. Born in Lexington, Kentucky, she holds an MFA in creative writing, has published experimental fiction in Pushcart Prize III and IX, Chicago Review, and TriQuarterly Review, and Twilight actor Edi Gathegi performed her “Bons” with WordTheatre in 2009. Her short story in Pleasures: Women Write Erotica (Doubleday) was partial basis for an ABC TV movie. Also with MA in art history, she worked with the Egypt Exploration Society’s excavations at el-Amarna and contributed to Amarna Reports IV and meetings of the American Research Center in Egypt. Shannon’s other nonfiction includes an essay on Salome in Approaches to Teaching the Works of Oscar Wilde (MLA Press). She has taught university creative writing courses and edited fiction for a publishing house. Under the pseudonym Elizabeth Adair she is the author of The Sun and Stars, a mystery novel set in the court of Henry VIII (BearCat Press, 2012). Currently she lives in Georgetown, Kentucky where she writes, designs books, and volunteers as a tour guide, researcher and back-scratcher for elderly stallions at Old Friends, a retirement facility for Thoroughbred horses.